Don’t Settle for the Blue Football 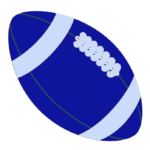 Working in management comes with a myriad of benefits and challenges.

Larry Steinmetz dives into his decision making process in his book, Kansas Sense.

Most of the time, it seems impossible to ever know. However, in this chapter from Kansas Sense, Larry Steinmetz gives some thoughtful insight into decision making that may give you a leg up.

Have you ever wanted something so badly that you couldn’t wait to get it?

Maybe you wanted the newest iPhone but because it was backordered for several months, you settled for a Samsung Galaxy S4. Next thing you know, your phone is overheating and bursting into flames because you couldn’t wait to have the newest smartphone technology. This example is a bit extreme… but you get the point.

A few days later, Larry’s mom came home with the blue football and Larry began tossing it around in the backyard. The first few minutes were great but as he continued throwing the ball around, he realized the grip wasn’t quite the same and the feel wasn’t right. Basically, this was no orange football. His mother found the orange football the next weekend and purchased it for her other son, Dave. Dave was thrilled with his purchase and Larry always regretted his overzealous decision to not wait for the orange football.

So next time you’re itching for the next best thing, take a breath, visualize what you really want and how good it will feel when you finally get it. Patience is key.

And remember… Wait for the orange football. Don’t settle for the blue.

Save Money With
VoIP Telephone Lines

Let us know what you think!  If you have a question or topic you would like us to cover, please send us a message.